The  Composers Conducting Immersion course will be a study intensive, hands on, three day workshop focused on:

Developing the comprehensive skills needed by composers to conduct confidently, clearly and musically in recording sessions, rehearsals and on the concert stage.

Topics covered but not limited to shall include baton technique, body posture, conducting with and without a click track

Conducting with or without a baton, score preparation, recording sessions, rehearsal skills

Each participant will conduct live musicians daily and the film footage, with personal video feedback, will be reviewed in class. 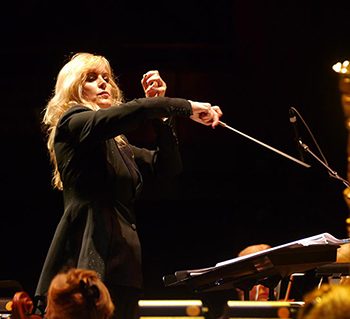 has toured to over twenty-two countries conducting operatic, symphonic, Broadway musical, and video game repertoire and is known for her commitment to performing the works of living composers. Appearances on the Late Show with Stephen Colbert, CBS Morning News, CBS Evening News and press coverage in the Wall Street Journal have led music critic Norman Lebrecht to call her “America’s most watched Symphony Orchestra Conductor.”

She is founder and conductor of Orchestra Moderne NYC, which debuted at Carnegie Hall in 2017 and is writer and director of Women Warriors: The Voices of Change, a production which has won over 20 international film and music awards. Premiered at Lincoln Center in 2019 and scored by a team of renowned female composers, it is the first live-to-picture symphony production that features a documentary film.

Andersson has led conducting workshops in New York and Los Angeles for the Alliance for Women Film Composers and the Society of Lyricists and Composers and currently teaches conducting to media and film scoring students at Brooklyn College at the Feirstein Graduate School of Cinema in New York.