This was our amazing – 10th Anniversary – programm 2018 with our extended Film Scoring Summer Academy in Baden (near Vienna, Austria )

Top Hollywood composers, orchestrators and arrangers introduced to this year’s participants. Our workshop has been incredibly successful over the past 9 years and we have been able to grow into this excellent summer film music academy. HMW is a one of a kind opportunity to work and study with some of Hollywood’s greatest film music talents in the wonderful ambience of the beautiful City of Baden. In 2018 starting from composing, orchestration and arrangement through midi mock-ups to recording with a real 50 piece orchestra on the new Synchron Stage Vienna – HMW also covered scoring for video games, big screen and – for the first time – for TV. Shortly: the entire film scoring process gaining real-world knowledge delivered by some of Hollywood’s best!A big THANK YOU to all Lecturers, Participants, Crew, Stadt Baden, Casino Baden, Synchron Stage & Synchron Stage Orchestra Vienna for partly coming from all across the globe, sharing unlimited & uncensored knowledge, experience, insights, enthusiasm, dreams, aspirations and working tirelessly to make HOLLYWOOD MUSIC WORKSHOP 2018 possible & successful !

Diving into composing for video games in this hands-on workshop. Learning some of the advanced techniques of writing music for this exciting genre. Also covering how to land a gig and more importantly how to keep it! Cris Velasco is a multiple award-winning composer of epic orchestral, dark experimental and modern hybrid music scores for video games, film & television.

HMW covered for the first time the specifics of TV scoring, brought to you by one of the best in this genre: Composing for multi-episodic dramas, approaches specific to the TV format and diving into techniques to keep a thematic arch across a TV series, while providing an individual score to every single episode.

Joe Kramer – From Concept to Composition

Conceptual & composing aspects of creating music for film. And finally, what is needed to get your composition recorded. Classes included behind-the-scenes looks at the scoring of Mission: Impossible – Rogue Nation  & Jack Reacher. Joe Kraemer is an award-winning film composer based in Los Angeles, who also scored: All Souls Day, The Poseidon Adventure , Hard Ground, Lone Rider & many more.Joe Kraemer offered priceless real-life insights & practical lessons based on his widely ranged experiences with conceptualization, composing and recording.

How to use sample libraries and sound processing tools to create a realistic orchestral sound out of the digital audio workstation (DAW) software. The class tauhgt techniques relevant to any DAW software and frequently used orchestral sample libraries. After the tremendous success in 2017 with T.J.’s outstanding & unique master class HMW offered 2018 an expanded version: a 3-day Beginning/Intermediate course & a 3-day Advanced course. T.J.  is a composer and arranger who has worked on projects ranging from small independent films to Hollywood blockbusters and Oscar-nominated scores. He has worked with some of the top composers in the film industry including Danny Elfman, John Powell, Hans Zimmer and Alexandre Desplat.

With the incomparable Conrad Pope, one of Hollywood’s best composers and orchestrators and with world class Grammy Award winning arranger Nan Schwartz. Conrad Pope regularly works with others composers, such as: John Williams, Alexander Desplat or Hans Zimmer & contributed a.o. to the scores for Harry Potter, Indiana Jones, Star Wars, The Hobbit & many more. For this years class Conrad Pope organized a real highlight: a live-skype-session with Tom Holkenborg aka Junky XL, his longtime colleague & composer of a.o.scores such as: Mad Max-Fury Road, Batman vs. Superman, or Tomb Raider. Nan Schwartz offered truly enriching lectures & her deep, sensitive and unique style of perception towards arrangement were an absolute inspiration. Presenting oustanding arrangements & discussing different approaches, she supported her students developing their own individual perspective on arranging & orchestration.

And Johannes Vogel – Conducting for Modern Film-Scoring –  Getting in touch with the basics of leading a recording session with a symphony orchestra. The workshop focused on the tools needed for a composer to conduct his own music. Additionally a real live recording experience was generated with live musicians during regular class room hours. Johannes Vogel is a composer himself and also a very busy session conductor working with Hollywood composers like Hans Zimmer, Geoff Zanelli, Rupert Gregson-Williams and many more. He is the principal conductor at Synchron Stage Vienna. 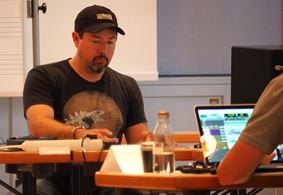 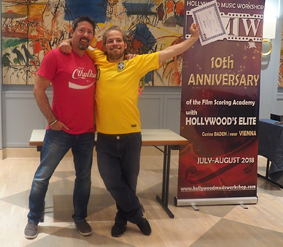 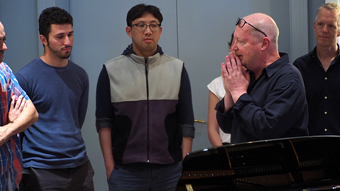 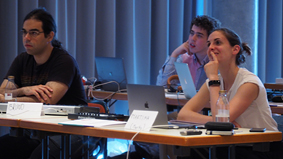 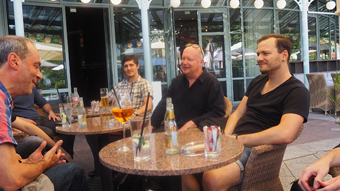 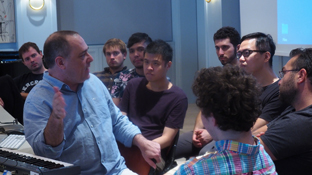 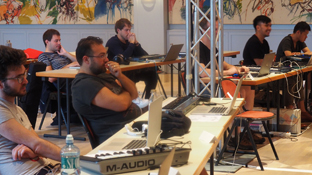 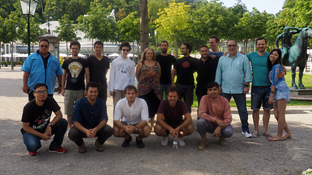 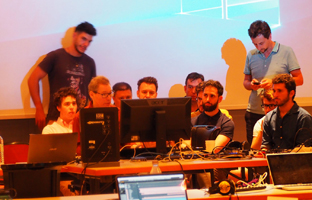 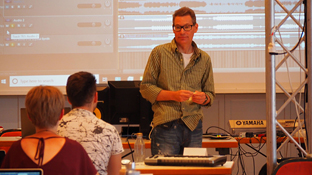 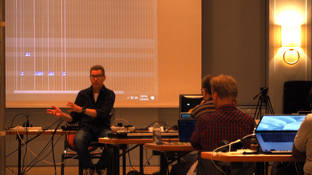 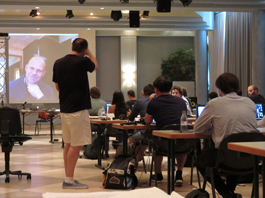 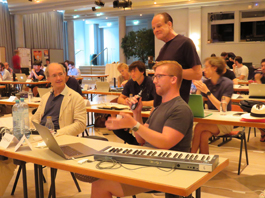 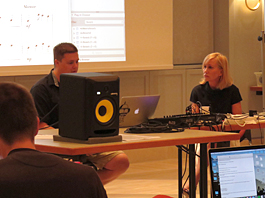 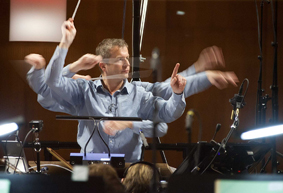 Hollywood Music Workshop celebrated its 10th Anniversary with a live concert at the Casino Baden, our workshop location, featuring  iconic film music from mostly Warner Bros. from Casablanca to Harry Potter and more. The evening of popular film music was performed by the Synchron Stage Vienna Orchestra under the baton of Nan Schwartz, Conrad Pope and Joe Kraemer.

They made sure sure that the compositions were recorded professionally using state of the art equipment at the world class Synchron Stage Vienna.
Renowned Hollywood concert master and Hollywood Music Workshop Director Dimitrie Leivici led the  50-piece orchestra and provided additional coaching. 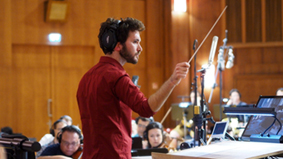 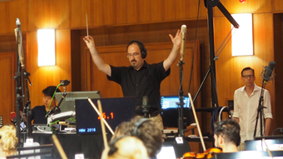 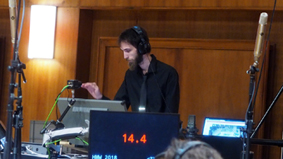 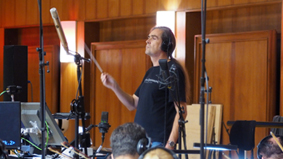 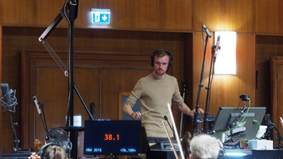 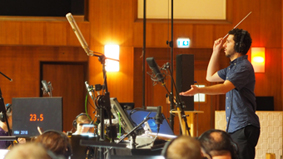 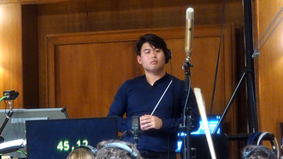 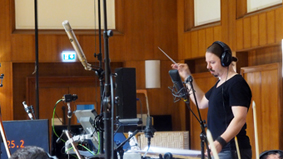 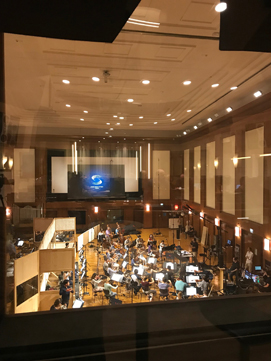 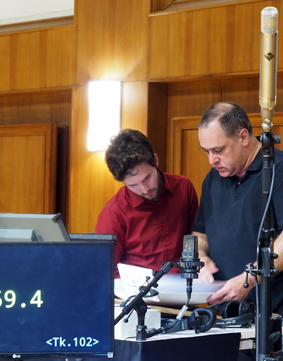 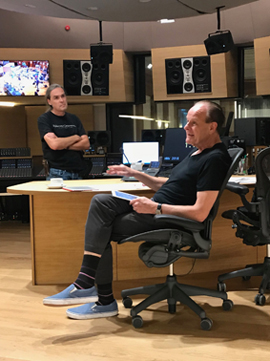 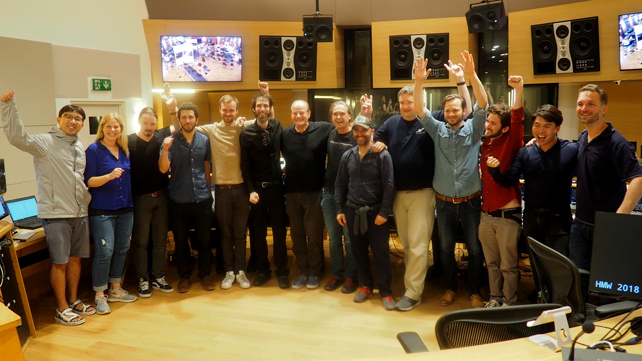 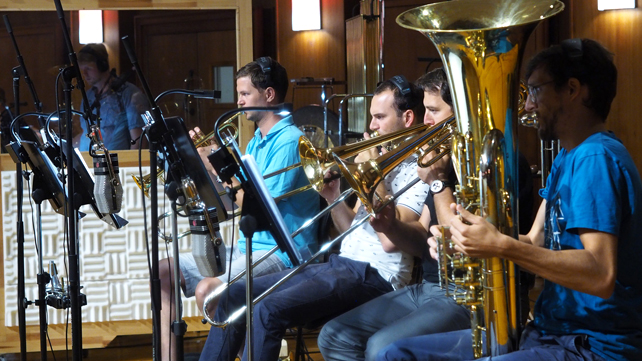